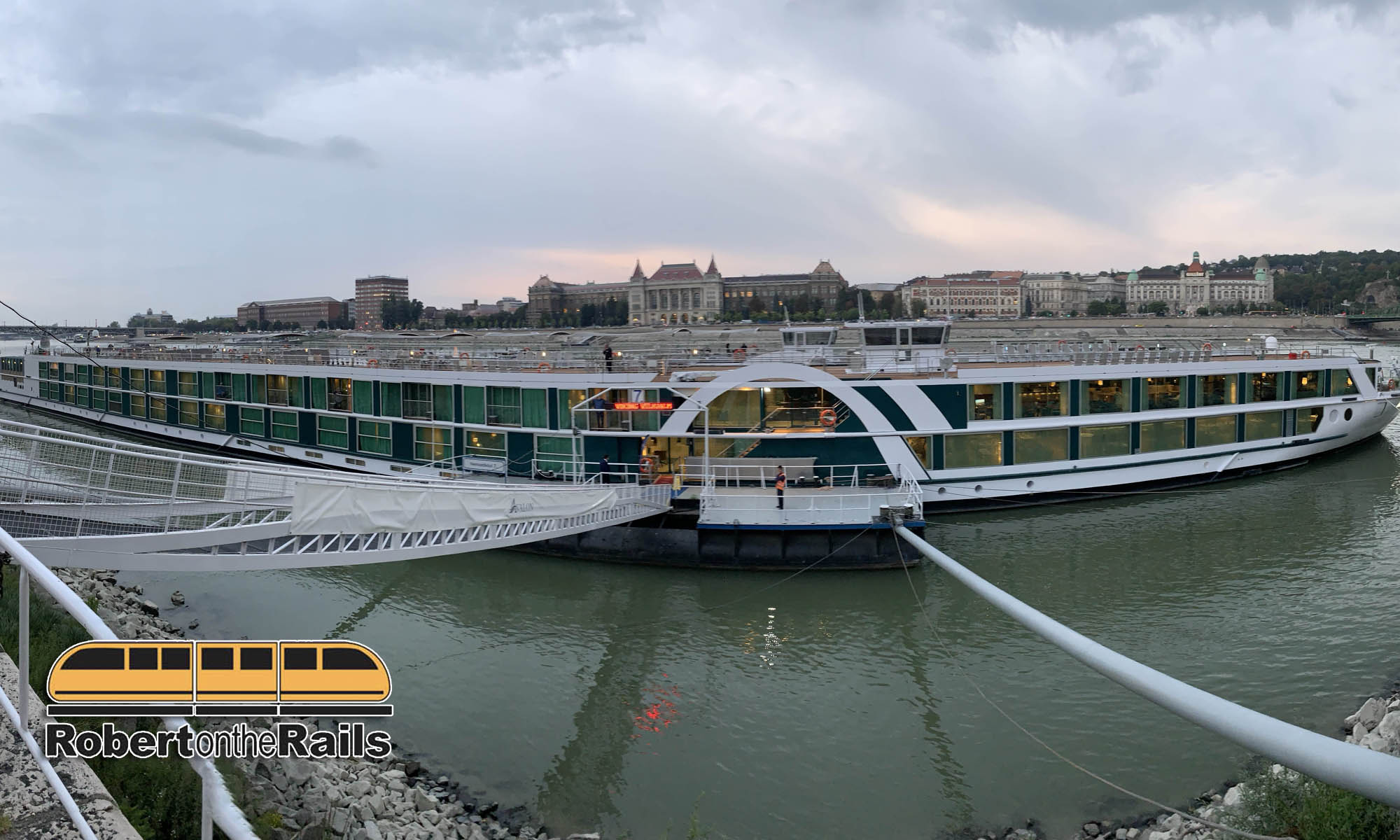 Thursday, 26th September 2019 Today I am flying back to Gatwick from Budapest. The flight is at 14:15 so I have a brief opportunity to do a bit of culture before I head off to the airport. Just along from my hotel I pop my head into the New York Cafe. Unfortunately the large queue of people waiting to enter, even this early in the day, doesn’t mean I can do much more than take a photograph of the interior. Next I walk down into the old Jewish quarter of the city, first stopping at the wall memorial. The most famous tribute to the half a million Hungarian Jews who perished under the Nazis during the Holocaust is the 60 pairs of cast-iron shoes placed on the edge of the Danube’s bank in memory of Budapest Jews killed here by members of the Hungarian fascist Arrow Cross Party. They were ordered to remove their shoes before being shot and their bodies fell into the river and drifted away. The old entrance to the Jewish ghetto is marked by a large memorial. The ghetto was a 0.12 square mile walled area of Budapest created by the Nazis in 1944. It only lasted for six weeks. 70,000 Jews were crammed into 4,513 apartments (14 people per room). 10,000 lost their lives during those six weeks. From the memorial I walked down to visit the Dohány Street Synagogue. This is the largest Synagogue in Europe, built between 1854-9 in a Moorish style. Unfortunately […] 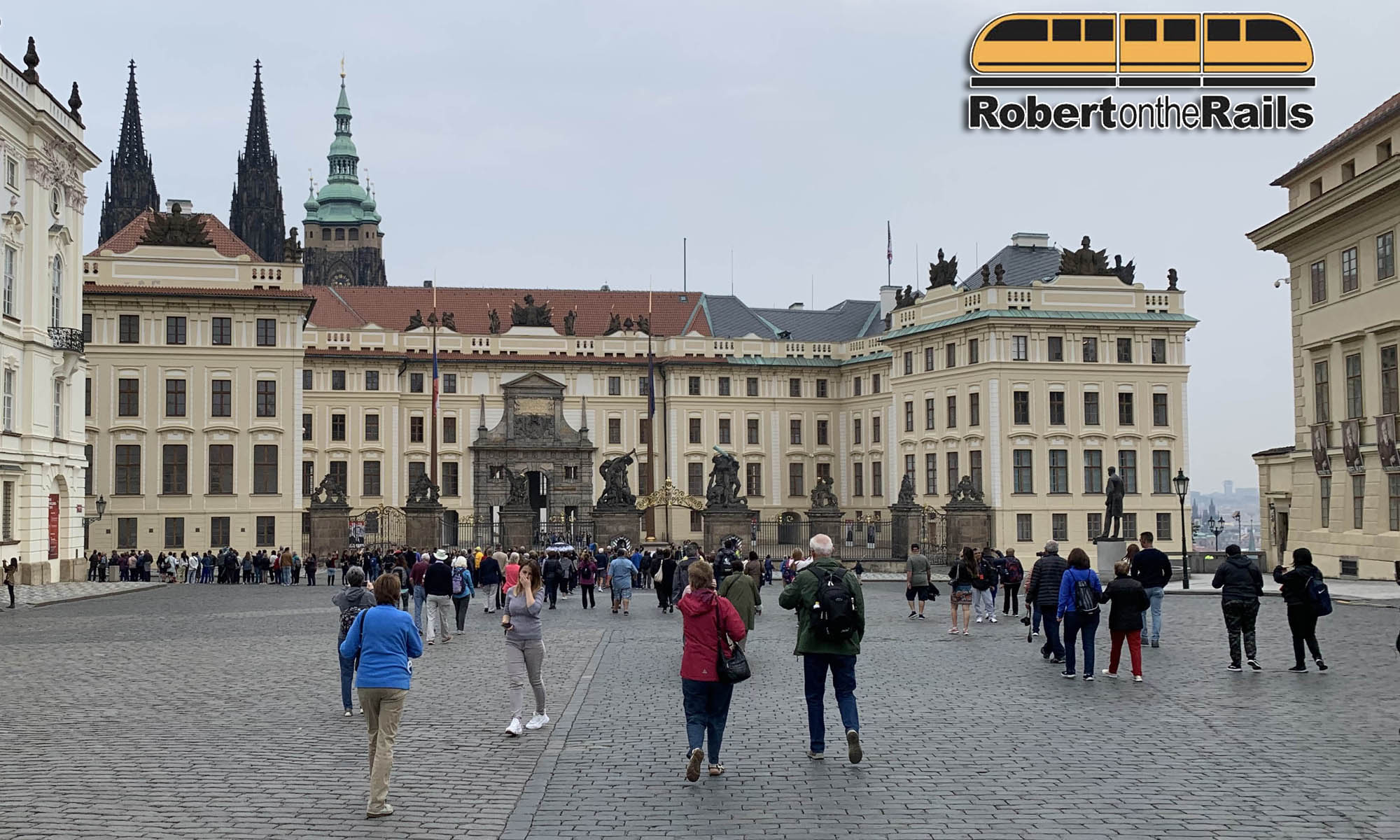 Tuesday, 24th September 2019 After travelling for two days, today is a day based in one place only – Prague. It is an early start this morning because we are first going to Prague Castle, which is notoriously busy. I have been to Prague previously, on a trip with my wife, and we never ventured into the castle complex because the queues were so long. The coach, along with our guide, collect us from the hotel at 08:15 and we head off to the castle. The drive has us skirt round the centre of Prague as coaches and other vehicles are not allowed in the central area to allow space for pedestrians. From the coach we have a 15 minute walk down to the castle where we join the queue to enter. It takes about 30 minutes to reach the front of the queue, with the queue getting longer and longer as we wait. I am glad we got here early. The castle is, according to the Guinness Book of Records, the largest ancient castle in the world and occupies nearly 70,000 square meters of area. Originally built in the ninth century it was last rebuilt at the end of the 18th century. Hitler stayed here in 1939 when he forced the Czech President to hand over the Czech nation to the Germans. During the war it was used as the headquarters of Reinhard Heydrich. An old Czech legend says that a usurper who places a crown upon his head […]

Saturday, 21st September 2019 This trip is a Great Railway Journeys (GRJ) tour. It is titled ‘Imperial Cities and 5 star Danube Cruise’. GRJ have a cruise ship that will travel for seven days from Budapest along the Danube to Passau. There are several options for getting to the cruise ship, these include direct flight; two days by train (first or second class) or four days by train (first or second class) travelling via either Berlin and Prague or via Bavaria. My tour is the four day tour, second class, via Berlin and Prague to Budapest. At Budapest I will leave the group on the cruise ship and return home to the UK. I then journey back later in the week to meet the group at Passau and take them back to the UK over two days, staying in Köln on the way back. Since it is an early start from St Pancras on the Sunday morning, I travel up to London on the Saturday afternoon and stay in a hotel close to St Pancras. Sunday, 22nd September 2019 I am up early on Sunday morning and meeting and greeting the tourees from 07:00 to 08:00 at the GreatRail offices, upstairs at St Pancras. This is a busy day for GreatRail with nine tours going out from St Pancras the same morning. The Eurostar train departs London St Pancras at 08:55 and arrives in Brussels at 12:05 where we are met by man and a baggage cage and our luggage […]